Channels Festival is proud to present two satellite events in November and December 2015, with our International Partners, Foundation for Art and Creative Technology (UK), and The Ferry Gallery (Bangkok). 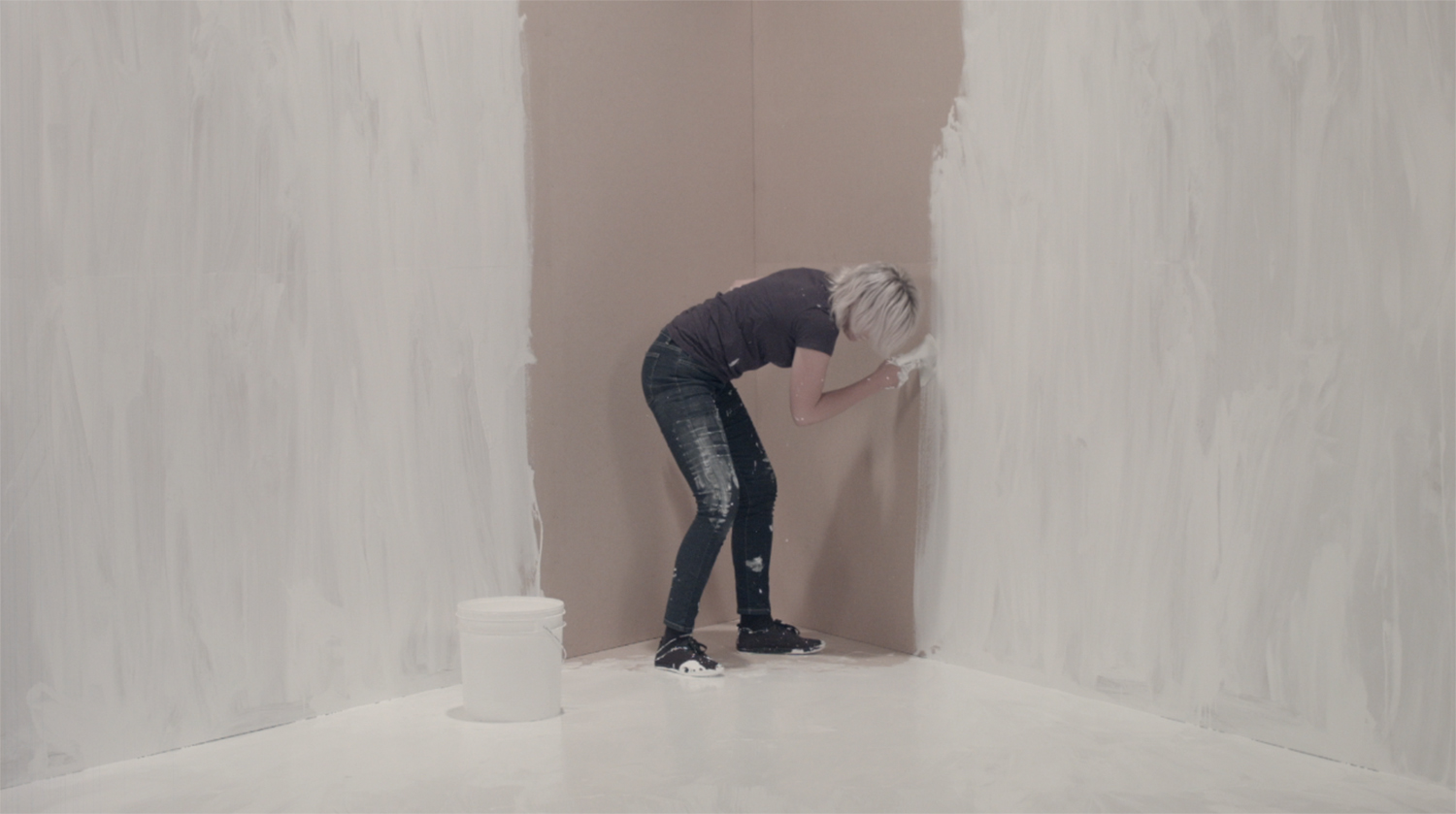 Presented by Channels, Floating Grounds is an exhibition in response to the site-specific video art gallery in Bangkok. Situated on an operating ferry, the exhibition explores the shifting perspectives of gestures and history, the ideological and the physical. ‘Ngallowan (They Remain)’ (2014) is a dual screen video collaboration between artist Kate Blackmore and Dharug elder and songwoman Jacinta Tobin. The work responds to W.E.H. Stanner’s notion of ‘The Great Australian Silence’ (1968) which suggested national amnesia, or what Stanner called ‘cult of forgetfulness’, silencing the history of Indigenous dispossession in Australia. An interplay between presence and disappearance, through repetitive gestures the duo performs in a dialogue that challenges the contexts of history and echoes the discontents of Australian identity. Laura Carthew’s ‘Immortal flower (무궁화)’ (2015) draws on a different experience of history. Exploring the cyclical nature of life, Carthew’s mystic female flower characters perform in a synchronised, ceremonial dance. Developed during her artist residency in Seoul, Korea in 2015, the work re-imagines Korea’s national flower: the Mugunghwa (무궁화) and its symbol of immortality. Theatrical and strangely unsettling, ‘Immortal flower (무궁화)‘ presents the cyclical journey that we each embark on, where our repetitive performances written into the grand narratives of history.

KATE BLACKMORE is an Australian artist and filmmaker whose work explores the intersections between contemporary art, documentary and anthropology. Since 2007 Blackmore has been a key member of artist collective Brown Council (with Kelly Doley, Frances Barrett & Diana Smith) whose live performances and video works engage with concepts of spectacle and endurance, as well as the dialogue between ‘liveness’ and the performance document. Blackmore’s solo and collaborative projects have been presented at institutions including Artspace (Sydney); Monash University Museum of Art (Melbourne); Gallery of Modern Art (Brisbane); Museum of Contemporary Art (Sydney); National Museum of Contemporary Art (Seoul); The Physics Room (Christchurch); and Art Nova 100 (Beijing). In late 2015 she will travel to India for an Asialink residency to develop a major new video project with members of the Gulabi Gang, a vigilante group of female domestic violence activists. Blackmore is currently undertaking a Masters in Visual and Media Anthropology at Freie Universität, Berlin.

LAURA CARTHEW is an interdisciplinary visual artist working primarily with video and photography. Her practice investigates rituals, memorialisation and choreography within both cultural and spiritual practices. Since graduating from Monash University in 2011, she has had solo and group exhibitions across a range of galleries including Anna Pappas Gallery, Nellie Castan Gallery, Platform Contemporary Art Spaces, Seventh Gallery and Trocadero Art Space. She is a recipient of Artstart, Australia Council for the Arts (2012), an Artist Encouragement Grant, Rotary Club of Melbourne (2013) and a Creative Young Stars Grant from the Australian Government (2013). In 2014 and 2015, Laura participated in a mentorship and residency in Seoul with South Korean Artist Yeondoo Jung. For this she was supported by a Creative Individuals Career Fund Grant, Copyright Agency Limited (2014) and the Ian Potter Cultural Trust (2014).

Pack a picnic dinner and join in the global conversation of memory, time, place and identity with Dr Tony Birch, Dr Sara Wills, artists Steven Rhall and Siying Zhou. The panel will investigate what constitutes contemporary Australian identities and their representations in visual culture.

As a satellite event to FACT Human Futures Forum and the FACT and Channels 2015 Artist Bursary video art competition, this panel discussion will explore Australian place-making through the lens of history and storytelling.

DR SARA WILLS
Dr Sara Wills is currently Associate Dean for Engagement and Advancement in the Faculty of Arts at the University of Melbourne, academic convenor of the Executive Master of Arts in the Graduate School of Humanities and Social Sciences, and a senior lecturer in the School of Historical and Philosophical Studies. Sara has taught and published widely on Australian migration issues, as well as histories of nature in nineteenth-century Britain. She has a particular interest in cultures of migrant memory.

STEVEN RHALL
Steven Rhall lives and works in Melbourne. Rhall holds a Bachelor of Arts (Photography), Bachelor of Media and Communication (Honours) and is currently completing a Master of Contemporary Art at the Victorian College of the Arts.

Rhall’s interdisciplinary practice responds to the cultural landscape, creating networks of interconnected signs and symbols. Reflecting upon both medium specificity, the meaning of objects and cultural semiotics, Rhall merges post-colonial and interpersonal narratives. Known for his photographic practice, Rhall incorporates 2D media within the 3D space – his installations often include video, found objects and materials of advertising.

In 2013, Rhall’s series Kulin Project was exhibited at the Centre for Contemporary Photography and later that year as part of ‘Melbourne Now’ at the National Gallery of Victoria. Rhall’s 2015 exhibitions include the touring group show Octoroon, solo exhibition We Specializes in Authentic Aboriginal Art at Footscray Community Arts Centre and a collaborative work with Siying Zhou titled Feeling Invisible Without the Lamb exhibited both at Counihan Gallery and as part of the 2015 ‘Channels Australian Video Art Festival’. Rhall is currently collaborating with artist Domenico de Clario on the Walking Slowly Downhill project. His work is held in various collections including the National Gallery of Victoria, the City of Melbourne and Horsham Regional Art Gallery.

SIYING ZHOU
Born in China, Siying Zhou is an interdisciplinary artist. She focuses on subjects such as the religious practice and cultural traditions in the life of the nomad, identity of individuals within the culture of globalization and the intricate relationship between the land and its dwellers. Her artworks has been exhibited nationally and internationally, including the group exhibitions: Innovators (2014), Linden New Art, Melbourne; Not Fair, Melbourne (2014); Testing Ground, a touring exhibition from 2013 – 2014, curated by Julie Gough; Here and There, Art from Northern Australia, Jogja Gallery, Yogyakarta, Indonesia / Nan Giese Gallery, Charles Darwin University (2010). Solo exhibitions: The Consequences of Success at The Food Court ARI, Melbourne (2014); The Comfort Promise, Northern Centre for Contemporary Art. Darwin (2014). Zhou is the winner of Northern Centre for Contemporary Art Prized Members Exhibition in 2013.

As an curator, Zhou successfully curated Art on Wheels (2012) with Public Art Development grant from Arts NT, the Northern Territory government (2011) and Artist Run Initiative grant from Australia Council for the Arts (2012); Territory Time (2010) in Melbourne under a commission from the Next Wave Festival 2010. Zhou managed Territory Time Touring Project (2010 – 2011) with the Presentation and Promotion Grant from Arts NT and curated an expanded exhibition for Chan Contemporary Art Space.

In additional, Zhou has been working in the Australian Contemporary Art industry since 2007 as an art worker. She was a Team Leader at the Australia Pavilion at the Venice Biennale in 2013 and Program Manager of the CAOS organisation NCCA: Northern Centre for Contemporary Art (formerly 24HR Art) from 2007 to 2013. She has worked with a diverse range of Australian and International artists, art communities and funding bodies. She holds a Master of Multimedia Design (Hons) from Sydney College of the Arts, The University of Sydney and Bachelor of Visual Arts from Nanjing Art Institute, China. Currently, she is a candidate of Master of Contemporary Art from Victoria College of the Arts, the University of Melbourne.

ABOUT FOUNDATION FOR ART AND CREATIVE TECHNOLOGY (FACT)
The Foundation for Art and Creative Technology (FACT) is the UK’s leading media arts centre. As “the place where people, art and technology meet”, FACT (and its hands-on workshop space FACTLab) boasts a dynamic program of exhibitions, films, hack nights, show-and-tell sessions and workshops—involving everything from build-your-own 3D-printed prosthetics to open-source making activities that span four days.

As a centre for research and innovation, FACT works with universities, post-graduate students and other partners across the creative, health, higher education and arts sectors to develop projects that explore the relationship between technology and culture. By preserving and encouraging new media and digital artworks, and fostering challenging work in new and existing artists, FACT uses the power of creative technology to inspire and enrich lives.