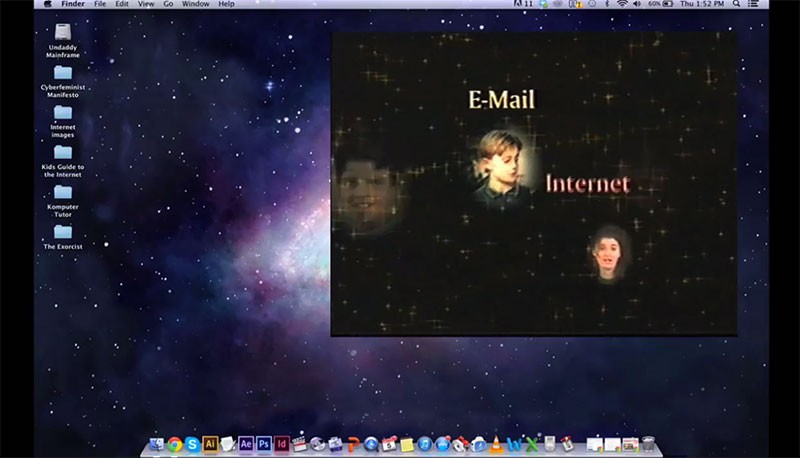 Explore the spatial aesthetics, look deep into the video vortex and experience the new world – these are the video visions of artists experimenting with the medium today.

I’m trying considers the language and politics of adult bodies engaged. In a broader sense, the video explores what it means to try and articulate that which eludes being spoken about, of grappling for meaning and finding none, but nevertheless trying to see this doubt as a constructive device. The Sisyphean nature of the action, wherein a single task is repeated ‘ad infinitum’, may be considered constructive in the sense that each failed attempt opens up a space for endless new attempts, new understandings and new opportunities; for the tragic, the comedic, and the absurd. As Samuel Beckett writes in Worstward Ho: ‘Ever tried. Ever failed. No matter. Try Again. Fail again. Fail better’.

This work holds the ability to convey an anxiety, a sense of impending, with no further conclusion. Nothing in the video gives the viewer enough information to determine its origins. The personal content holds little importance to decoding the work. Within the experience is a series of symbols, that if understood would allow a deeper reading into the circumstances surrounding the work. This understanding does not matter. The ecstatic realisation, or synthesis is, simply, there is no further truth or meaning. It is a representation of a reality, manipulated through editing and sound to give a projection of meaning, of purpose. A crushing and ecstatic realism.

Regular Division is a looping spiral of meticulously layered scenes built from video shot in a number of indoor gardens in Europe and Asia. The geographically disconnected locations merge to form a hybrid panorama of foliage under a canopy of gridded glass. The piece directly references histories of landscape painting via expressive paint marks lifted from famous paintings by artists such as Vincent van Gogh and Arthur Streeton and layered over a high-resolution filmic landscape.

This choreographic documentary shows a series of ‘Interrelational Field Recordings’ from Siglufjörður on the Northern coast of Iceland. Through an artless concept of repetitions and bodily gestures an anthropological portrait of the inhabitants in a small fishing village gradually emerges. Each of them is articulating their own person, not in the dimension of lingual communication, but simply through the similarities and differences that only the viewer is able to comprehend.

Elephant is an experimental short film, focused on perception. A young woman is swinging between two walls in an open space. Next she fights with herself in a boxing ring.  The video conveys the inexpressible nature of an action in a situation, where there is deficit of information.Elephant is a film that questions one’s perception of the existence (Dasein) in relation to his identity.

Ongoing studies for performance based video within the context of the human element in small space.

The Quiet Zone is an evolving multimedia project by artists Elisa Gonzalez and Daniel Froidevaux, documenting the unique relationship between a community of electro-refugees and the radio astronomy observatory at Greenbank in the heart of the National Radio Quiet Zone. The NRQZ is a federally mandated radio quiet area that has become a refuge for an emerging community of electrically sensitive individuals. Fascinated by an area that is both a centre for scientific discovery, and a refuge for those seeking to escape effects of technological progress, the project contemplates the role of place in creating possibilities for resistance to the permeation of communications technology, and poses questions about what quiet means in the digital age.

Family crockery (whiteness) is constructed from found family videos, originally recorded on VHS tape. The video content has been edited to create patterns concentrating on the object of white crockery, the occurrence of food and the influence of Colonial tradition within the South African family. This abstract piece has been choreographed to create a sequential video and directed by the materiality of the VHS tape. The final piece conceptualises the significance of repetition as what defines tradition.

The raw VHS footage illustrates recorded memories captured in the late 1980s to early 1990s. This footage has been visually experimented with during the editing process by cropping frames and the collating of repetitive patterns. Family crockery (whiteness) investigates the artist’s mixed South African heritage by visually exploring footage of the family to experiment with perspective, perception, recognition and uncertainty of the video image, analogous to the blurriness of memory and messiness of cultural traditions.

Intentions is part of an ongoing series of work that began on residency at The Banff Centre in Canada in 2013. Participants of the Our Literal Speed residency were asked via email to submit a how to / instructional You Tube video that related specifically to their art practice.

As Intentions unfolds, the screen becomes a multiplicity of moving images, yellow text is used to identify each participant as twelve You Tube videos become locked in a battle for recognition. Each video vying for attention becomes part of an ongoing performance. Working simultaneously with digital interfaces whilst also addressing these interfaces Intentions becomes not only an archival and indexical representation of artistic intention and production, but also an object to be exhibited and documented across various spaces.

Video has two narratives – conducted equivalent. First is tracking graphics, made for the needs of the group DDG which is placed on my blog aestheticblog.tumblr.com and has been displaced by other users for a dozens of times. I travel to unknown places discovered by the rebloged links of other users to see where my work wandered – in what context my work is shown. Second narrative concerns a problem of internally displaced people. There is no legal definition of this, despite the fact that it is one of the most significant and symptomatic issues of our time, still accumulates and remains unresolved.
These shifts overlap and identify each other, are devoid of boundaries, boundaries of legal, moral, aesthetic, state, political, human, escape into the unknown.

Undaddy Mainframe revisits the feminist malware of pioneering Australian art collective VNS Matrix. In this recombinant work the collective’s seminal text ‘A Cyberfeminist Manifesto for the 21st Century’ (1991) is recoded via instructional computer videos of the 1990s. Materials: A Cyberfeminist Manifesto for the 21st Century (1991), HD Green Screen Hand Gesture For iPad Animation (2013), Kids Guide to the Internet (1997), Komputer Tutor: Komputer Kindergarten (1993), The Exorcist (1973) and Googled internet images. With thanks to VNS Matrix: Josephine Starrs, Julianne Pierce, Francesca da Rimini and Virginia Barratt. This project was commissioned for Forever Now, a 21st century collection of artworks created to communicate to outer space. This sequel to the 1977 Voyager Records is curated by Willoh S. Weiland, Brian Ritchie, Thea Baumann & Jeff Khan.

This four minute video developed in conversation with Claire Lambe appropriates the pre-code film ‘Just Call Me Savage’ (1932) starring ‘IT’ girl, Clara Bow. The footage accentuates the unusual behaviours and dialogue of characters Nasa and Moonglow and utilises simple double screen editing techniques to draw attention to Nasa and actress Clara Bow and she performs a hysterical overwhelmed state. Within the context of feminist critique her rage offers the vice of ownership over hysteria in light of the provocations of her father and Moonglow the male victim of her juvenile behaviour.

In their new work artists Heath Franco and David Capra explore concepts of the Hollywood-style dream sequence, making reference to Alfred Hitchcock’s Vertigo and Walt Disney’s Dumbo amongst other classic examples. Interested in the moving-image’s ability to represent psychological landscapes, the artists revel in the freedom this storytelling device allows, blurring boundaries between reality and imagination.

A movement with an as-yet-unidentified cause. An opposition of the future, of the mind or of another dimension.

The cabin is on fire! Krystle can’t stop crying, Alexis won’t stop drinking, and the fabric of existence hangs in the balance, again and again and again.

A collaboration between Deborah Kelly and Christian J Heinrich, this one-minute long video artwork was made to be sent into deep space as a message to our future friends.

The video work Supernature is an audiovisual analysis of the correlation between patriarchal structures and the media representation of female power. Symbolic figures are artistically reformulated and therefore removed from their historical and ritual context of meaning. By that the artist gives the symbols a new identity to expose mechanisms of patriarchal structures, power and control. Protagonists, toys, and cosmetics transform to unreal creatures: a female bodybuilder adorns herself with a pink veil, Demons running through the woods, a blonde girl is playing with a glittering ball, manicured hands arrange cosmetic products as an occult ritual, strands of hair fluttering in the wind. In abstract and increasingly concrete tangible movements over textures, skin and objects: people and material falling seamlessly into one another as consumer products. The imagery is alienated by slow motion, producing a dream-like and sacred atmosphere. This impression is intensified by an unsettling soundtrack starring drops, breaking wood and squeaks. The different lengths of the video and audio track played in loop continuously produce ever new and unpredictable constellations which open up a multitude of possible associations.

After visiting North Korea, undertaking an Asialink Residency at the MMCA National Art Studio in Seoul, and consulting with North Korean communities in Seoul, the artist studies two reunification monuments in North and South Korea: The ‘Three Charters for National Reunification’ near Pyongyang, and the ‘Statue of Brothers’ at the Korean War Memorial in Seoul (appearing in the opening titles). The two figures from the ‘Three Charters for National Reunification’ monument embrace in joy, only to have their bliss dissipate and a new, and unexpectedly uncomfortable, era to emerge.

Terminal Island is a visual and psychological journey inside a recycling company in the Port of Los Angeles, where the world of materials restarts. Through nuanced manipulation of documentary footage, the film presents an alternative perception of time and space in a physically specific yet philosophically ambiguous environment.

My performance work ‘Scartato’ means discarded in Italian and is a durational work that involves me collecting rubbish I encounter on expeditions in public places. I tape these bits to my body until I gradually transform into a human monument of litter.

The Australian Screen is a satirical video work by emerging photographer and installation artist Anja Loughhead. Once idyllic ‘documentary’ footage is overlapped to reveal an alternative perspective of the migrant processing at the Bonegilla Migrant Reception and Training Centre active in Victoria, Australia from 1947-70. Phrases such as ‘over the sea in a ship’ and “they look tired” deviate from their initial purpose as the words are repeated and distorted throughout the piece. ‘The Australian Screen’ is a tongue and cheek commentary on the way in which Australia continues to capture, record and transmit national immigration policy information through the television screen.

Primitive Nostalgia is a unique voyage through Hollywood cinema, featuring some of the most memorable dance numbers ever to be captured on film. In the assemblage of these cinematic samples, which explicitly record portrayals of cultural dances performed by various ethnic troupes, a concern for the construction of cultural identity emerges. Through Garcia’s simple intervention of appropriation, in which she collages herself into the existing footage using green screen technologies and costuming, there is an immediate transformation of familiarly nostalgic dance scenes into a peculiarly humorous and disorientating montage that exposes and interrogates the complexities of the representation of race and otherness. It is her attempt to reclaim the colonised self, to provide an alternate history and to challenge an institution of filmmaking shaped by alterity under Western hegemony.

Chloe Cheuk Waiting for Another Round (2015)

Waiting for Another Round is about the wheel, a symbol of the ruthless encroachment of urbanization. After the clearance of occupied sites, Cheuk patrolled the streets and documented the process of wheels devouring every inch of the remaining trace of the protest over 20 days. As the wheels roll on, different protest sites join together and fall apart endlessly.