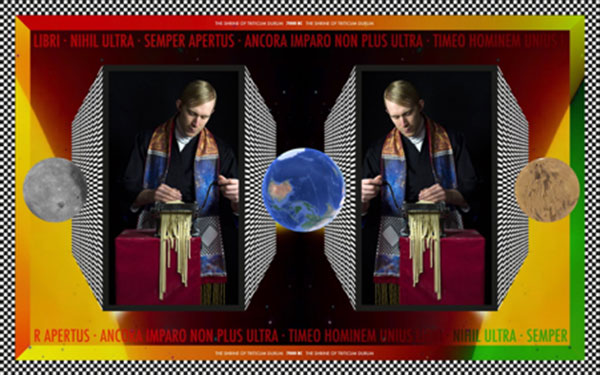 Still image from The Shrine of Triticum Durum (2015) by Keith Deverell, courtesy the artist.

Keith Deverell delves into his love of ASMR, his relationship with technology, and the appeal of narrative. Questions by Emma Steinfort.

Currently I’m in the final period of a PhD, an interrogation of documentary form within a video art practice. In the past year I have been considering my work as being postdoumentary, which for me is an embrace of poetical and mythological narratives. The Shrine of Triticum Durum, the work I am presenting at Channels, is a conclusion to my study whilst also serving as place of departure for future works. I’m really interested in how video works which for me is also a practice of sound and can facilitate physical and spacial experiences around particular subject matter that goes beyond traditional screen spaces.

One recurring element throughout your video art, are images of hands; hands brushing hair, holding drinks, hands playing violins and cellos, guitars and keyboards. What draws your eye/camera to them?

I hadn’t really considered this! My first thought was that walking has been a dominant form in my work. I guess reflecting on previous works with this question in mind, is the realisation of how much I have focused on certain physical actions involving hands. I have long had a fascination with gesture. I think hands play an important role in how we communicate, and eyes too within this context- in particular in a non-verbal manner. Hands of course facilitate and represent touch and our ability to physically ‘feel’ things, and make things.

You are incredibly active across multiple social media platforms. What relationship do you have with the internet as an artist and as an individual? And how has it affected the creation and display of your works?

I’ve had a long relationship with the internet and found it really intriguing in the late 90’s. In our modern world, it’s pretty hard not to have a relationship with the internet as it facilitates so much of our communication and inquiry. In addition to the internet, my greater relationship is with technology in general. I often use old and new technologies in my work, recent works I have used old film formats, different types of televisions, and also screen recordings of open security cameras sourced through web browsers. Video art is fundamentally a technological medium. My interest in technologies, and the internet is a part of this. It presents aesthetic and critical opportunities to explore particular concepts and narratives.

Earlier this year you directed Jlin’s music video Unknown Tongues. How did that come about? What was it like collaborating with her?

I was really fortunate to get an email from a good friend in London who was working with Planet Mu asking if I would direct JLin’s clip despite not having had the good fortune of meeting JLin herself as she lives in the US. The production of the clip did mean that I was able to work with Lillian Steiner, an accomplished local contemporary dancer. The conversations that I have had with JLin, and the response from the international music press, has been really positive and I believe highlights the creative talent in Melbourne. Hopefully JLin and I will be in the same city in future and we’ll get the opportunity to meet face to face.

We recently heard that you have been working on a new collaborative video work, The Acidtophic Lake, with Emina Dzananovic and Nathan Moore. Could you tell us about this exciting project and what it has been like working with Dzananovic and Moore?

Nathan and I started working together over a decade ago in the techno scene in Melbourne and continued our relationship producing a number of site-specific audio visual performances. The Acidtrophic Lake was initially a collaborative work between a concept that I was developing and a separate work Emina had been spit-balling with me. We realised the two ideas amalgamated, would create a strong conceptual video work that embraced feminist ideas we were both exploring. During development of the script/concept, Nathan returned to Melbourne from WA, where he had been for two years connecting with his country. Elements of the narrative of the work made sense to us when Nathan joined the team as the male subject in the video, taking on the dual role of Western and Aboriginal identity. Working with such different social backgrounds provided a rich environment to explore contemporary issues of identity which we’re developing further in a new work currently in planning.

Recently I had the awesome experience of working with Supple Fox for Dark Mofo on a series of ASMR films. It was the first time that I had been exposed to the vast ASMR community online and have had a fascination with it ever since. The way it uses everyday banality, reminded me of my early VJing life where I would also film myself shaving and cooking food as content. I am really interested in the way that ASMR subverts the need for messages in visual communication as its reason is to explore personal experiences and sensations. I recommend just going down the rabbit hole on YouTube – anything ASMR!

Jersey born, Melbourne based artist Keith Deverell has exhibited extensively in Australia and Internationally. Working in postdocumentary, Deverell uses the horizon line as metaphor to consider the inherent problematic of truth and politics of place. Deverell is currently undertaking a PhD through the School of Art at RMIT University.