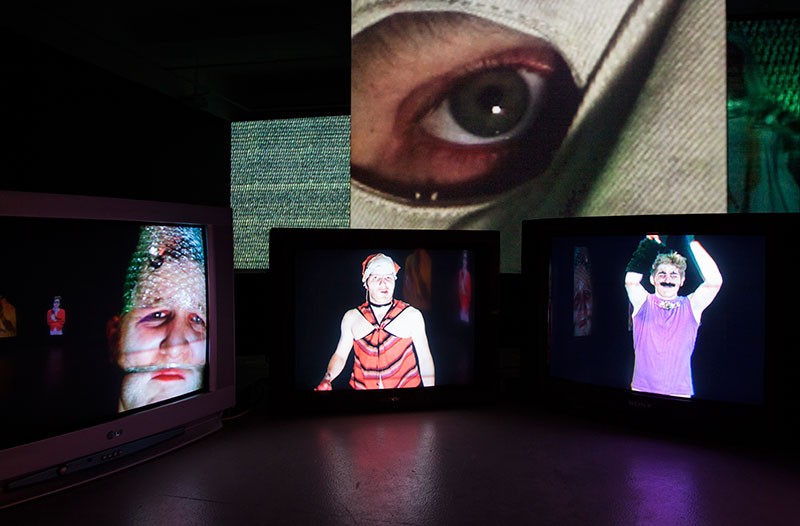 Heath Franco’s colourful absurd and nameless characters are difficult to forget. He speaks to Emma Steinfort about the importance of rhythm, directness, and an altered reality.

I would define my current practice generally as video art but which involves a lot of things I enjoy doing – snapshot photography, performance, improvisation, music, video production and installation. Recurrent themes or motifs in my work are ‘home’, suburban terror, and imagined possibilities of space-time. In a personal sense, I might define my practice as a way for me to simultaneously process and escape from, reflect and alter my ‘reality’.

In your work, notably in WUNDER CLOSET (2011) and TELEVISIONS (2013), you often employ repetition of words/phrases, as well as body movements. Why is creating a rhythm within each work important to you?

When I stand before the camera, I find that I am only compelled to say one thing or say nothing and do one thing. Because there is only one phrase/thing, I repeat it. Through repetition, I try different inflections, facial expressions, until I feel I’m doing something interesting, that ‘feels right’ and transcends myself. Sometimes this builds towards a climax, sometimes there is only one or a few parts suitable for use in a video. In the editing process, there is another type of repetition introduced, a true cut & paste loop is available that is more musical by way of being perfectly metronomic.

To answer the question – rhythm is important to me, as it is a vehicle to progress through the time-based work in a way that holds the audiences’ attention, that they are familiar with and can latch onto but that is much less literal than plot-based narrative. It also allows me to work in a way that is more intuitive, introducing changes and progressions when it ‘feels right’ as I would do if recording a music track. 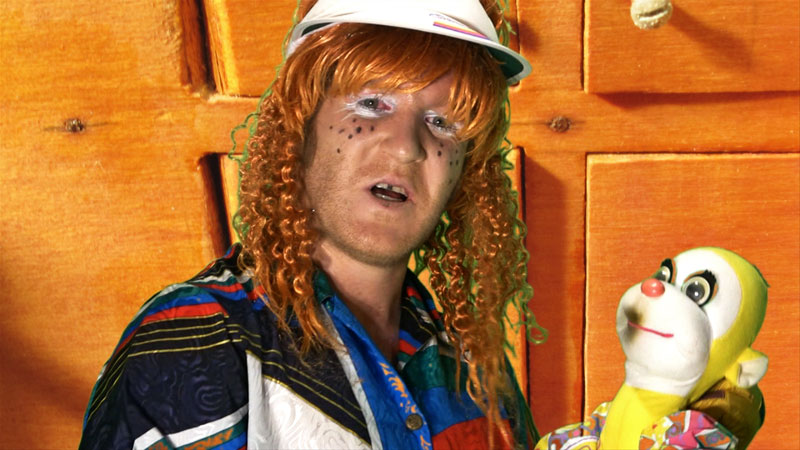 A key element of your work is the direct eye contact you/your characters have with the camera (and thus, ultimately with the viewer). In your recent work PORTRAIT (2011-15) the tight framing emphasises this connection. Do you feel your relationship to the camera is an impounding of the male gaze, or a deconstruction of it?

Between those two options, I’d say impounding, although not intentionally. I suppose this is quite evident in WUNDER CLOSET where the figures on screen are praising and applauding the viewer. It reflects the male gaze to some extent and tries to subvert the normal relationship between artwork and audience, i.e. the artwork is exalting the (albeit unseen) viewer. In a practical sense, I look to the camera lens because it is a point of focus to perform to in the studio when I’m alone working. I suppose I like the directness. I hope the viewer imagines that they may be part of the work, and that they are compelled to view it.

Some reviewers have called your depiction of suburbia and the eccentrics who live there brutal, others brutally honest. What role does empathy play in your work?

I think empathy plays an important role in my work. Character development requires some level of it, so it’s important for me to try to embody a character, however briefly, in a way that is not simply parody. It’s true that the characters I perform could be described as eccentric, but I guess they’re the most fun! I like to make work that excites me and exaggerates the mundane – so the zany characters fit into that. Performing the hyper characters is a cathartic and somewhat soul-cleansing ritual that expels a lot of frustrated energy.

In the past you’ve stated that you don’t want to give the characters in your works names. What power do you feel names have? How much of someone’s identity is tied to name?

I don’t like using names because I like the ambiguity and strangeness of the nameless characters in the videos. I want people to make up their own minds about what the character is ‘like’ and invented names are often too descriptive or prescriptive, or worse – (too) cheesy, silly or derivative. To give a character a name gives the audience the ability to familiarise themselves and a certain level of affection attached and ownership assumed by the audience, which I don’t think will improve these works. I think of these characters I perform as materials to make videos from- they don’t need names, only descriptions to help me organise video clips.

In your work you often employ detailed costumes and make-up. How important are these tools in helping you define the various characters you portray?

Tim & Eric Awesome Show was great. I really love Eric Wareheim’s music videos. HAM is one of his most recent – it’s full on!

HAM from Eric Wareheim on Vimeo.

Heath Franco works primarily in Performance-based Video creating layered works that explore popular culture and desires, domesticity/’home’, the chaos of existence, and contemplations on the nature and possibilities of space-time. Franco’s absurdist, repetitive performances are a distinguishing feature of the artist’s works that are often presented as immersive gallery installations.

Heath Franco’s work is featured in exhibition In the Epoch of the Near and Far at Grey Gardens Projects from the 19-27 September, he will give a talk at Provocations Brunch Club on Sunday 20 September along with two other video artists Caroline Garcia and Eugenia Lim, and his collaborative work with David Capra will screen as part of Video Visions at ACMI Cinema 1 on 25 September.