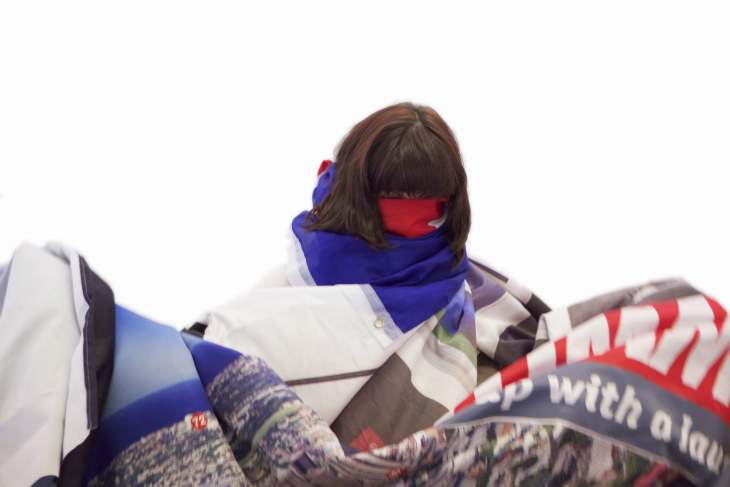 Channels 2013 artist Tania Lou-Smith discusses at the incongruity of an action in its location and the power of capes. Interview by Stephanie Milsom.

I am a performance artist that utilises live performance, dance, video and photography as part of my practice. In terms of the content of my work, I tend to be preoccupied with ideas of liberation, and what could more broadly be termed, “breaking free”. I look at this from my perspective as a woman, in relation to societal structures, or even liberating objects from their regular contexts.

Your ongoing series’ Untitled (domestic gestures) and Untitled (pink) feature a huge variety of environments that you perform in. How do you find these spaces, and what is their significance?

I used to perform and devise theatre that was site-specific, a major part of the process was finding, connecting with and making work from non-traditional theatre spaces. It must have developed from that history, and my personal aesthetic, to locate interesting spaces in which to make work. As a main part of my practice relied on the incongruity of the action in its location (a toaster in a paddock for example), driving around and collecting sites for work became a part of my practice. I think in another life I would love to be a location scout! 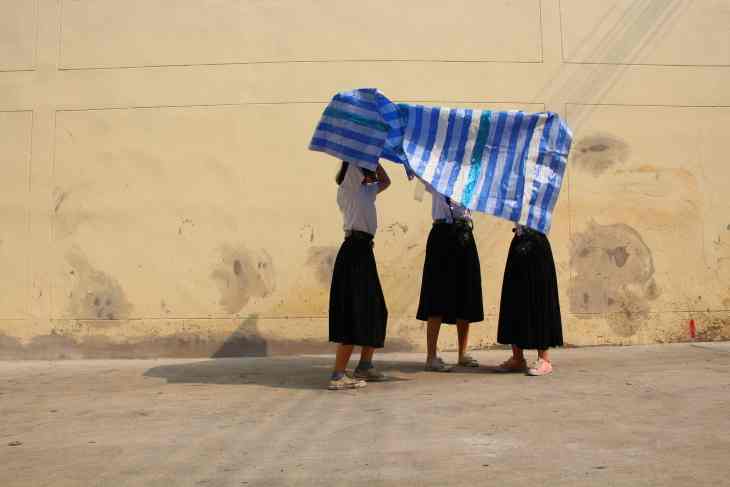 We saw on your blog that you recently spent some time in Bangkok for the 10th International Art Workshop at the Poh-Chang Academy of Arts. Tell us a bit about that.

The art workshop at Poh-Chang was an unexpected gift. I was recommended to take part by some artist friends here in Melbourne (thank you Aaron Martin and Pimpisa Tinpalit) and spent a week in Bangkok as part of the workshop. Over 50 international artists attended, mostly from South-East Asia, and another 150 Thai artists took part too. Artists were allocated studio space and assistance from Poh- Chang students if they required it, and then spent three days making work. The workshop culminated in an exhibition of works produced during that time. The workshop featured mostly painters and some sculptors so I felt like a bit of a curiosity sneaking around taking photographs, and sewing. But I was very pleased with the outcome despite the time constraints.

There were some interesting cultural differences apparent from the workshop. It seems a lot harder to make a living from art in Australia in comparison with many other countries represented at the workshop. Also, whilst we were there Thailand was crowning this year’s “National Artist” – who receives a yearly income from the government and subsequent status. The workshop was a fantastic experience and I would encourage others to take part in similar exchanges.

While dance and performance are perhaps the most integral element of your practice, for us, costume also plays a significant role. What is it that draws you to capes?

Yes using capes or vast swathes of fabric as costume has been lurking in my work for the past 18 months or so. I find it difficult with costume- with gestural work or performance art the history and tendency is often to wear black- this draws attention to the gesture, and aims to act as a ‘neutral’. It also in my mind denotes a kind of seriousness in the work (something I try to fight). I have of course worn ‘theatre blacks’ in work before. But I find that audiences are so sophisticated, a black outfit is never really neutral, a detail in the tailoring of the pants, or if the top is too tight, your eyes are again drawn to the figure performing. I find this especially problematic as a female performer. So, I think these fabrics are trying to deflect attention from the female form perhaps. I also attribute my love of costume to my past (theatre) and love the possibilities for movement and the dance of the fabric. The fabric dances its liberation, much like the quest of the woman depicted in my works. 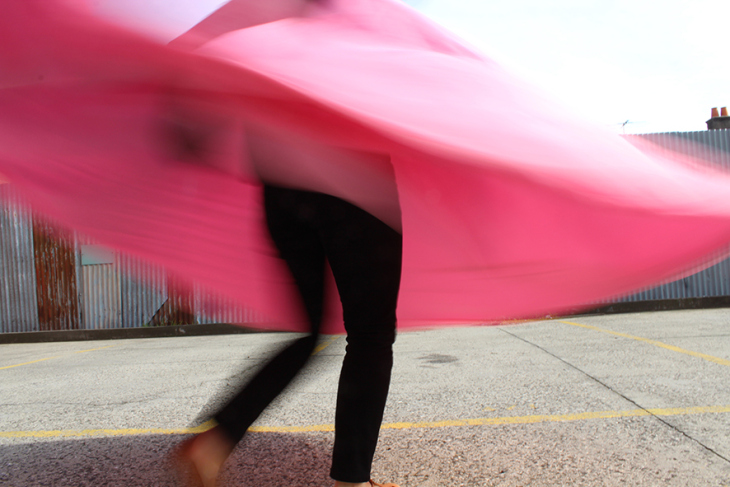 What projects are you currently working on?

I’m continuing to explore costume but in a studio setting this time, very staged photographs from costumes made from flags, real estate banners, and various other politically-loaded material. To counter all that time inside I’m off on location again filming absurd video works, about video actually, which is proving lots of fun.

I’ve also just started a fantastic collaboration with a brilliant VJ Trewlea Peters, and we are filming live visuals onto the body, which is really exciting and different from my usual practice. I’m also moving into a studio at the Abbotsford Convent in June as part of their Studio Start-up program, so I look forward to seeing what comes up from that – if anyone wants to visit me there please feel free to pop in for a coffee and chat.

Tania Lou-Smith is a Melbourne-based artist who has previously shown work at Channels 2013.